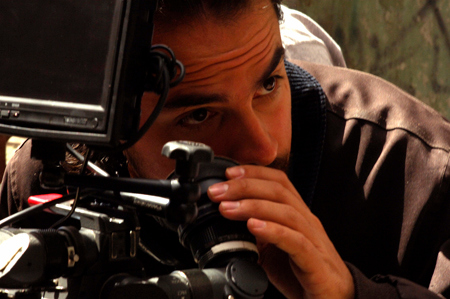 Now that the Sundance Festival is over, Alex Rivera gives us an inside peek to what it’s like to judge one of the most respected international film festivals. Digital media artist and filmmaker, Rivera, went from being a Sundance winner for his film “Sleep Dealer“ in 2008 to a juror last week.

“Being invited to be a judge is a complete honor and a privilege,” says Rivera who understands first-hand the complexity of what goes into filmmaking. “It takes about one hour and a half to watch a film, but it takes an average of six years to make. So as a filmmaker I feel very sensitive to that. It’s hard to judge, because you know how much goes into it.”

This is the second time Rivera, 38, has been chosen to serve on the Alfred P. Sloan Jury. The first time was in 2009, the year after his sci-fi thriller “Sleep Dealer,” a tale about immigration in a militarized futuristic world where borders are closed and technology takes over, won the prize of the same name. It also won the Waldo Salt Screenwriting Award and was picked up by Maya Entertainment for U.S. distribution that same year.

The Sloan Award is presented to an outstanding feature film that focuses on science or technology as a theme, or depicts a scientist, engineer, or mathematician as a major character. This year, “Robot & Frank,” directed by Jake Schreier and written by Christopher Ford, and “Valley of Saints,” directed and written by Musa Syeed, tied for the win. The two films will split the $20,000 cash award by the Alfred P. Sloan Foundation.

Rivera says the two winning films couldn’t be more different stories, but they were both innovative in the way they were told.

“When I go to Sundance, I want to see people taking risks and breaking new ground,” says Rivera. That’s why there should be festivals. People can try new things and take big risks, while making sure it’s well made. I saw a lot of that this year.”

He compares being on the Sundance jury to being on a jury in a courtroom, except instead of 12 jurors, there are five.

“You travel together to screening to screening over a few days,” recalls Rivera. “You get to know each other, and then comes the moment of truth when you come to a decision.”

Sundance critically chooses individuals from a variety of backgrounds to make sure to get different points of view.

“The jury I was on was half scientists and half filmmakers,” says Rivera. “There was a guy from Berkeley who builds robots, and a woman from Rutgers who studied the brain.”

Rivera mentioned that two of his favorite Latino films that he had the opportunity to see during the festival were “Mosquita y Mari,” and “Filly Brown.”

“Gina is shining like a light right now,” he says. “’Filly Brown’ is sensational and bold and filled with contrast and drama. ‘Mosquita y Mari’ is more subtle and feels more like the kind of quiet life that most of us live, but both are really striking because they showcase Latina talent at their core.”

This is an example of how he says two films can be polar opposites but equally poignant.

“When you find that contrast, it gives me hope that we’re going to see a wide variety of Latino stories in the future,” says Rivera. “But we are still far from where we should be. We are the largest minority in the U.S., so we should have a film in the movie theater every week…We should radically be telling our stories. There is a long way to go.”

Currently, Rivera is working on a TV series and a follow-up feature film to “Sleep Dealer.”