You may or may not know that the traditional masked Mexican wrestling sport, Lucha Libre, has had a long-time presence in the U.S. in its nearly 80-year existence. It became more mainstream in the U.S. after the 2006 comedy “Nacho Libre,” starring Jack Black, and its presence is only growing. This year, a partnership was announced that will promote Lucha Libre AAA – Mexico‘s largest wrestling league – to the U.S. audience and possibly get a spot on El Rey, a new English-language Latino channel set to launch in January 2014.

This Saturday and Sunday, Javier Clorio, a Mexican-American communications professional originally from California, says he is excited to bring Lucha Libre to New York City in honor of the sport’s 80th anniversary. He raised $5,000 to bring 26 wrestlers from the U.S. and abroad – with secret identities behind their masks – to battle each other (“technicos”/good guys vs. “rudos”/bad guys) to become the star luchador of the Big Apple.

“People around the world recognize Lucha Libre — they go to stadiums, concerts and other events wearing Lucha Libre masks,” says Clorio. “I am also excited, because this event will benefit the East Harlem Business Capital Corporation — they help people accomplish their dream of having their own business by helping them with their business plan…I know currentHispanic business owners who have capitalized from the EHBCC, and I am glad that by doing this event we are raising funds so more people can accomplish their dreams.” 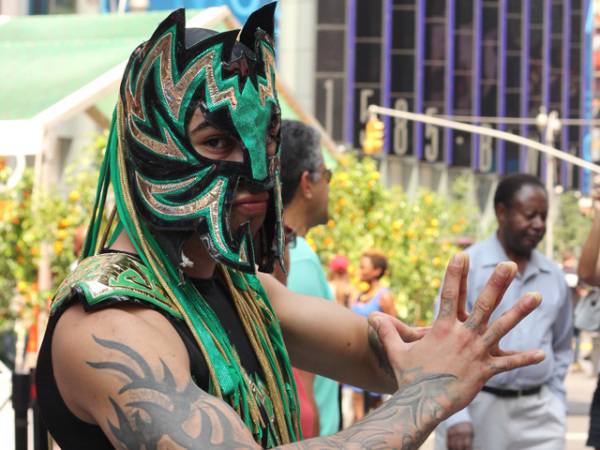 The 23-year-old luchador who goes by the name Máscara Celestial is accomplishing his childhood dream of becoming a professional luchador. Originally from Mexico City, he says his parents didn’t believe him when he would tell them he wanted to be a luchador when he grew up, but he’s been practicing since he was 15. Two years ago, he moved to New York to challenge himself to a higher level.

“Life in the U.S. is not easy,” says Máscara Celestial, who works 12 hours per day at Kennedy Fried Chicken and trains in the gym for three to four hours every morning, with only one day off from work to compete. “I haven’t slept for the past three days, but I don’t want to remain stagnant. I want to excel as a luchador.”

He explains he wants his good guy character, Máscara Celestial (“heavenly mask”), to develop a great story line, until his body can’t take it anymore.

“I love my character — a good character in a very difficult world,” he says.

Pequeño Pierroth says when a luchador puts on his mask, he is also putting on his alter ego identity. He was born and still lives in Mexico City, but in Lucha Libre world, he plays a Puerto Rican. His job as a “rudo” is to get the audience riled up.

“I tell them, ‘Why are you proud to be Mexican if you are dying of hunger?” says Pequeño Pierroth, named the diminutive form of a famous Mexican luchador – Pierroth. “Some people really get angry for real.”

He has 21 years of experience in the ring — a few months of which were with the WWE.

“When I was a boy, I was the little one and other kids would bully me,” says Pequeño Pierroth, who was also poor as a kid, selling candy and singing on corners to help support his family. “Now I travel to Madrid, London, Denver, Chicago and Philadelphia…I’m not rich, but I’m stable and happy. I love Lucha Libre — maybe more than my wife.” 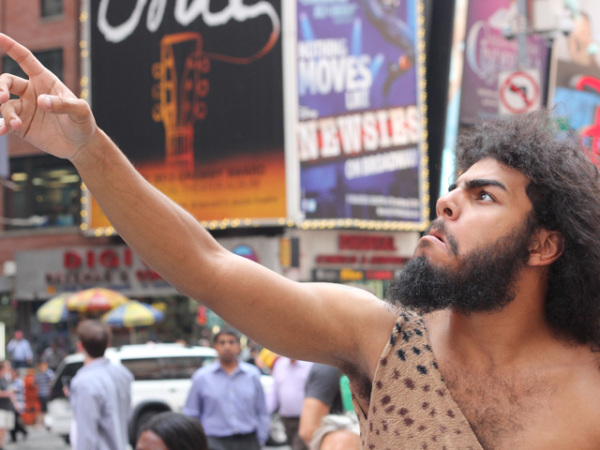 Caveman is a 20-year-old Puerto Rican from New York. He trains with a Dominican coach at the Bronx Wrestling Federation.

“When I was growing up, my brother and family watched wrestling faithfully,” he says. “Going into high school, I met a girl and she broke my heart. I went through a depressed phase and almost committed suicide.”

His low self-esteem at the time transformed the shy and timid youth into the Caveman today. He says he let his beard and hair grow, forming his version of a mask. He had the urge to become a hermit, but his wrestling coach made him a Caveman outfit and urged him to keep wrestling as the Caveman persona. Today, he says he easily transforms into his character, pretending to pick bugs out of people’s hair and acting surprised whenever he sees a modern object — the most important thing to him he says is to make his fans happy.

“Now professional wrestling is my life,” he says, although he still doesn’t get paid for it. That’s a privilege that comes once your name becomes known in the Lucha Libre world. “I’ve dropped a lot of things because of wrestling, because it saved my life…I’m actually living my dream.”