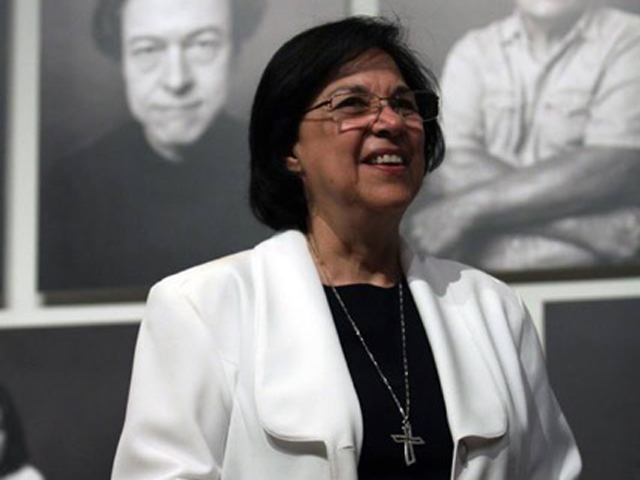 When one thinks of drug wars, a nun does not come to mind. But 67-year-old Sister Consuelo Morales’s fight for the families of those missing or killed in Mexico’s drug wars is one of the powerful story lines in the new documentary, “Kingdom of Shadows,” making its world premiere at SXSW on Monday, March 16.

There’s a Texan rancher who fell into drug smuggling, because he had trouble making ends meet as a farmer, as well as a Homeland Security Investigator on the U.S.-Mexico border who witnesses the continual rise of violent and deadly organized crime. Then there is Morales, a Catholic nun in Monterrey, Mexico fighting for the rights of families whose loved ones have been killed or “disappeared” as a result of drug violence.

Sister Morales returned to her native city of Monterrey, Mexico in 1992, after years working to help indigenous communities in Veracruz and in Mexico City. She came back to find her community in turmoil. It was then she helped found Citizens in Support of Human Rights (Ciudadanos en Apoyo de Derechos Humanos, CADHAC) to help families in need – and she has devoted her life to that cause for the past two decades.

“The only thing that is important is that they are human beings, and they have dignity. I am their sister,” says Sister Consuelo Morales, about the families of those missing in Mexico.

According to the latest official numbers from the Mexican government, the number of people who have disappeared since the start of the country’s drug war in 2006 is nearly 23,000 (although this number has fluctuated widely depending on the administration). Filmmaker Bernardo Ruiz argues the most international attention this crisis has gotten was the disappearance of 43 college-student protesters in the southern Mexican state of Guerrero in September 2014, recently declared dead.

In an interview with NBC News, Sister Morales says the violence has substantially increased since 2007. “This situation of violence touches not only the people involved with narcos or the drug business, but it also touches families and young people that had nothing to do with it. When the Mexican government decided to stop this…the situation became worse and worse, because citizens were in between the delinquents and the soldiers. They were in a very vulnerable situation.”

She says that individuals ages 16 to 35 are the most affected by the violence and targets of kidnappings/killings. The worst years, she remembers, were 2010 through 2012.

She explains this behavior is common, because Mexican citizens fear everyone – even the authorities – because they are also known to be involved in narco trafficking.

“Two years ago, a kid – two and a half years old – was walking with his father very close to his office,” remembers Sister Morales. “His father wanted to take him to the doctor. On the corner, there were two groups of young people. One of them was taking people away. They took his father, and left the boy on the street..If we don’t do something to support and give what we can to this child to grow in confidence, what will he have in his heart?”

According to Sister Morales, the people who are generally taken away are the ones giving economic support to the family. In this way, she says, the narcos are instilling fear in the community. If you don’t have money to pay them their “dues,” you get taken away.

The petite yet strong-willed nun arrives at CADHAC around 8:30 am every morning. After meeting with her team, she has appointments throughout the day with people needing help with justice or violent situations.

“What I do know is that people like Consuelo (Sister Morales) and the families she works with, need more international support,” says documentary filmmaker Bernardo Ruiz. “From my perspective, they’re the ones who represent our path forward.”

“They come and ask questions and share information with us, and we help them resolve their problems,” says Sister Morales. “We may help them, and stay beside them, but never in front of them. We help them with the tools to get justice.”

There was a point in her life, she says, when she questioned her belief in God. But helping people was something that was innate to her since she was a young child.

“I asked myself what was the message that Jesus gave us – it is to love each other,” says Sister Morales about why she does the work she does. “The only thing that is important is that they are human beings, and they have dignity. I am their sister.”

Bernardo Ruiz sees her as a savior.

“What I do know is that people like Consuelo, and the families she works with, need more international support,” he says. “From my perspective, they’re the ones who represent our path forward.”