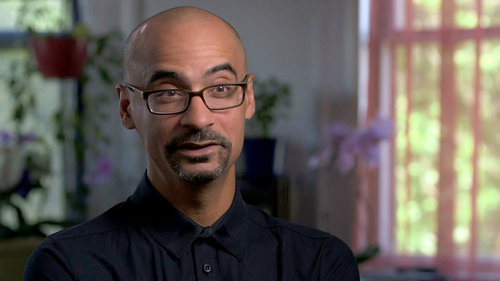 Junot Díaz doesn’t remember a time when he’s ever felt completely at home in the United States — the country he’s lived in for more than four decades and where he has found a home as an award-winning writer.

“I grew up in the margins of society — I assumed everyone, when they were 6 years old, was pulled up out of their home country and placed in another place where you had to learn English,” he told NBC News.

Díaz immigrated from the Dominican Republic with his family in 1974, settling in a low-income area in central New Jersey, an ethnically diverse enclave a few miles from Manhattan.

Now 49, he became an American citizen in his early 20s, and went on to win a Pulitzer Prize for his 2008 novel, “The Brief Wondrous Life of Oscar Wao,” and receive a MacArthur Genius Award in 2012.

Díaz didn’t mince words when asked about a recent decision by the U.S. Citizenship and Immigration Services to no longer describe America as “a nation of immigrants” in its mission statement.

“I’m not surprised that a president who is a white supremacist would push for that kind of alteration,” Díaz said.

Reflecting on his naturalization ceremony, Díaz said, “what was most astonishing about it was that very few of us come into contact with the engine that produces so much genius and so much of what is extraordinary with this country.”

That powerful American moment “is something that these white supremacists fear and despise — disavowing the contributions of people of color,” he said.

Clearly concerned that the U.S. is becoming more and more fractured, he said people these days are “consumed by irrational hate.”

“We are living in very strange times,” Díaz said. “It’s a challenging time to be a person of color.”

But to him, now is the time for people to decide whether they are going to resist. “I believe in true democracy, inclusion and reparation,” he said. “If it’s dark out, I’m still going to fight.”

Díaz is one of 11 Americans, including former Secretary of State Condoleezza Rice and award-winning historian David M. Kennedy, who spoke about their lives, what it means to be an American and what can bind us together in troubled times in the documentary film, “American Creed,” which aired Tuesday (Feb. 27) on PBS (check local listings).

When asked, “What does being American mean to you?” Díaz responded that he didn’t know the answer but that he didn’t believe he has ever been “accepted” as an American.

Díaz, whose new children’s book, “Islandborn,” is due to be released next month, credits his childhood school librarian, Mrs. Crowell, with treating all students equally. She even believed a Spanish-speaking immigrant would one day write the next great American novel. That support helped solidify his identity in an unstable world, and he realizes how important that is to maintain for those coming after him.

“Libraries and the public school system are underfunded,” Díaz said. “We have to have a thousand fights in a thousand places.”

Díaz saw the contributions of immigrants firsthand in his working-class New Jersey neighborhood.

“We were like some strange United Nations experiment. My upstairs neighbor was African-American, my best friend was Cuban, my other friend was Egyptian,” he said. “It structured a lot of my thinking, a lot of my art. But in a nation as large as the U.S., it’s difficult to achieve consensus.”

He does not think issues like immigration or gay marriage are tearing our country apart; the “enemy,” Díaz said, is what he calls the economic elite and “mass media manipulation.”

“We’ve been very unfortunate in our leadership, and in our economic beliefs. The folks that have money and power have done much damage in this country,” he said. “When your only goal is to expand your profit, you’re not thinking about the civic, altruism, the well-being of the majority.”

“In the long-term,” Díaz said, “that’s going to leave us with a profoundly damaged planet.”

“We are very fortunate that we have many people that believe in civic justice,” he added. “Otherwise we’d be in much worse shape.”

What Díaz is doing, and what he urges others to do, is to get involved, through volunteering or other activities, and contribute to our “shared” world.

“I don’t approach our civic society as a writer or author, but as a member of it, regardless of my profession,” Díaz said. “I think everyone owes — everyone takes more from this society that they put back in. We all need to take a little time to pay back the interest, to pay back the debt that is ours.”

Being a part of the documentary, he said, is an attempt to open up a dialogue at a time when we are told there should not be a dialogue.

The documentary includes an account of two politically opposed activists who are working to find common ground. Joan Blades, the co-founder of the progressive advocacy group MoveOn.org, founded Living Room Conversations in 2011. She is working with Mark Meckler, the co-founder of the Tea Party Patriots, as well as others on the right, to create meaningful dialogue between people of opposing views.

“We need to fight to make society better, to make it more accountable, make it safer, to leave it better for the generation that comes,” Díaz said. “Will we win this fight? I’m fighting because it’s the right thing to do.”

“I will take the humble devotion of the average person that believes in justice,” he added, “and I believe we are going to win.”