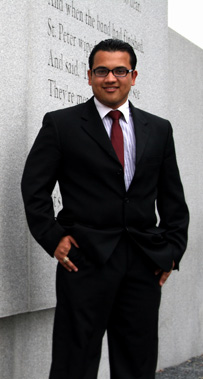 Jose Luis Zelaya is a well-spoken, educated 24-year-old male with indomitable determination and rapid fingers. He is also anxiously awaiting confirmation from the Guinness World Record’s title as the fastest crocheter at 37-44 stitches per minute.

Zelaya says he’s been using his crocheting skills to earn a living since he was 13. As a kid in his native Honduras, he was forced to find odd jobs to help support his family.

“I saw a lady crocheting in the street, and it was cold, and I wanted to make myself a sweater,” says Zelaya. “I asked her if she could teach me, and she said no, because I was a guy and not a girl.”

Being the determined soul that he is, he didn’t let “no” stop him. He just taught himself by watching closely as other women crocheted on the street. Little by little he learned and mastered the art, and this December, he started his own business on Etsy where he sells his homemade beanies for about $15 each.

Now an undocumented grad student, Zelaya still has to support himself by crocheting since he is not allowed to legally work in the U.S. The faster he crochets, the faster he can put himself and his 20-year-old sister through school.

Zelaya is a graduate student at Texas A&M University in College Station, where he is pursuing a master in English as a Second Language curriculum instruction. He struggles to make his monthly payments every month since his beanie income is as unstable as the weather.

“Last weekend I went around knocking on people’s doors,” says Zelaya. “That’s the only way I can support myself.”

He says his faith in God also pulls him through.

“If I take care of other people, I know that He will take care of me,” says Zelaya. “I know I will be ok. I know something is going to happen last minute to help me.”

And Zelaya gives back as fast as he moves his fingers. Not only is he the president of the Council for Minority Student Affairs at his school, he is a leader in his campus ministry, and he spends the rest of his free time tutoring in College Station middle schools.

“He is organizer of people and can motivate and communicate from the heart,” says the University’s director for Latino campus ministries, Devin Tressler.  “He told me, ‘Mark my words, I might be gone from here, but two years from now there will be a tutoring program in every middle school run by college students.’”

Tressler says he believes a lot of it stems from Zelaya’s experience.

“He has a huge heart, and he wants to help young people,” says Tressler. “That’s what I respect about him most. He helps people to see the significance of helping others.”

Zelaya’s most serious problem might be how is going to make next month’s rent, but he’s not worried.

“After I graduate, I would love to work to fix the immigration system,” says Zelaya. “If the Dream Act passes, I will benefit. If it doesn’t pass, I will go on to get my PhD so that I can inspire a lot more people to pursue higher education. I don’t know how I will, but I know that if I’m dedicated and persistent, and I don’t quit, I will make it.”