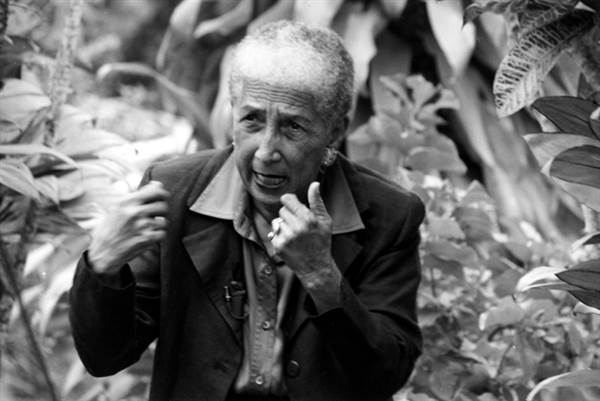 From the film “Antonia Pantoja” by Lillian Jiménez

The life of a Puerto Rican New Yorker who transformed the lives of so many Puerto Rican and Latino youth was honored and celebrated with the unveiling of a mural at the heart of the city’s “El Barrio.”

In her 80 years, Dr. Antonia Pantoja founded organizations that have helped educate and give opportunities to many. The educator and community activist, who identified herself as a “Nuyorican,” accomplished much more than most in one lifetime.

Perhaps best known as the founder of ASPIRA – a non-profit organization which to this day encourages positive self-image, commitment to community, and education to Puerto Rican, and other Latino youth; she also founded the National Puerto Rican Forum, which promotes economic self-sufficiency; and Universidad Boricua, the precursor to Boricua College; among many other organizations dedicated to community empowerment and education in New York City and beyond.

In 1996, Pantoja became the first Latina recipient of the prestigious U.S. Presidential Medal of Freedom Award for her role in the education and leadership development of Puerto Rican Youth in the United States and Puerto Rico.

On Saturday, Nov. 20, after three years in the making by renowned artist Manny Vega, a mosaic mural of Dr. Pantoja was unveiled which will allow her live on forever in “El Barrio” – a predominantly Puerto Rican community in New York City, which was very close to her heart. 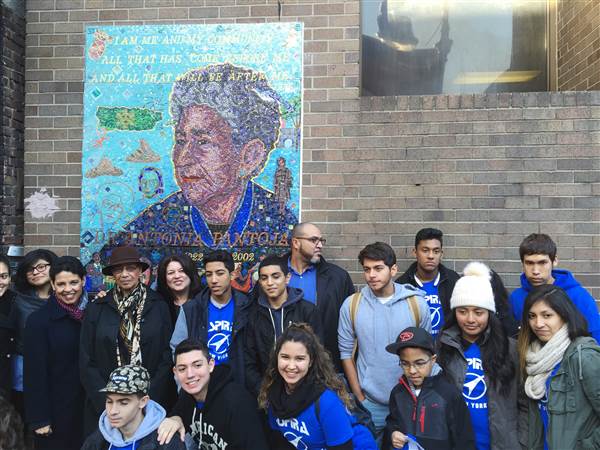 The event, attended by 100 plus people of all ages, began with the screening of “Antonia Pantoja ¡Presente!,” a 2009 documentary of the activist’s life by Lillian Jiménez. Afterwards, New York City Council Speaker Melissa Mark-Viverito – a Puerto Rican woman who is the first Latina in this position- gave a few words.

“The emotion in this room is intense,” Mark-Viverito said after watching the film. “When you think about the contributions she made, and the logros(achievements) we’ve made, we can trace them all the way back to her.”

Mark-Viverito went on to say that she had the privilege of meeting Pantoja in the late ’90’s. Together, they would take Puerto Rican students to the island to learn about their culture.

“She had a very infectious spirit,” said the New York City Council Speaker. “Everybody that worked with her would be inspired by her. She was a believer in young people and the concept of paying it forward. That’s what we need to continue to do. The importance of putting these mosaics up is a way of making sure our contributions will never be erased.”

Pantoja moved to New York City, from San Juan, Puerto Rico at the age of 22. The year was 1944, right before the end of World War II, and just preceding the mass exodus of Puerto Ricans to the mainland.

Although she arrived with a teaching certificate from Puerto Rico, Pantoja’s first job in NYC was as a welder in a wartime factory. However, since Pantoja was born with aspiration, she went to school right away – ultimately, graduating from Hunter College and then Columbia University’s School of Social work.

In the documentary, Pantoja said, “[Puerto Ricans] were coming to work in factories, and the children didn’t know what the teachers were saying.”

As was her character, as soon as she saw injustices, Pantoja would waste no time to take action.

“ASPIRA was absolutely the project that drove her – she loved the kids,” Jiménez, director of the film, told NBC Latino. “She had been thinking about the position of the Puerto Rican community in the ’50s, and the lack of leadership. She wanted to develop an organization that developed leaders.”

To this day, Jiménez says she is always meeting people that say “I was an Aspirante.” She says there are thousands of them – from actors Jimmy Smits and Luis Guzmán, to Angelo Falcón, political scientist and president of the National Institute for Latino Policy.

Jiménez told NBC Latino that the mosaic was a collective experience of all the people who were impacted by Pantoja’s life.

“We were about 12-13 on the committee – we had a lot of conversations. I gave [Manny] the film, photos of her, and he would always show us renderings. Finally we settled on this one design. Everyone on the committee laid tiles – [Supreme Court Justice] Sonia Sotomayor even came to lay tiles,” said Jiménez.

To many, Pantoja was a life-changing role model. But to Dr. Wilhemina Perry, her partner of 30 years, Pantoja was the love of her life. They met when Pantoja joined the faculty of the San Diego State University’s School of Social Work in 1978.

“A couple of people had gathered to greet her in San Diego – I was teaching there at that time,” Perry, now 81, remembers about the first time they met. “She and I had started talking – we talked about social work – our professions. I remember thinking this is the most interesting person I ever met…She was like dazzling!”

Together, they co-founded the Graduate School for Community Development in San Diego, where they lived at least 15 years, and then moved to Puerto Rico for 13 years. There, they co-founded Producir – a community organization that has helped a rural community create its own cottage industries to generate employment -before they both decided to move back to her beloved NYC. Unfortunately, they only had two years there, as Pantoja was diagnosed with stage 4 cancer.

“They predicted she would have four months to live, and she only had three months,” Perry told NBC Latino. “No one wants to lose a loved one, but I felt a little relieved because she had no pain – it was so quick.”

What Perry says she remembers most of Pantoja was that she was, “a very powerful, tiny and intense person, but she could also be funny and have this smile come on her face. She was very intense, but had this light side of her…”

“I’m thinking what would make her most happy about the mural, is the fact that who she was, and what she was trying to teach, will live now publicly. Not so much for her, the person, but she would see it as a way of extending her legacy and encouraging people to use her work as an opportunity to do their own work. She felt very strongly about that. She would say it’s not about me, but what are you going to do to make society a better place?” 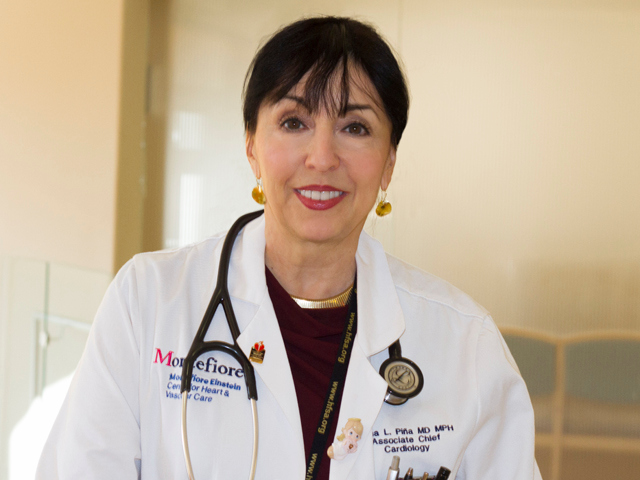 Dr. Ileana L. Piña was born in Havana, Cuba and moved to Miami with she was six in 1959.

In July 2011, Dr. Piña joined Albert Einstein College of Medicine and Montefiore Medical Centeras professor of medicine and epidemiology and population health, and vice chief for academic affairs, respectively. Her primary role is to reduce re-admission rates for heart failure patients. She also serves as a principal investigator for 11 ongoing research projects and presented on several topics at this year’s American Heart Association Scientific Sessions.

Most recently, Dr. Piña was the first Hispanic and female to win the Chairman’s Award for volunteerism from the American Heart Association for her dedication to educating the community about heart health across diverse populations.

How does it feel to be recognized for your long-time dedication to heart health?
Humbling. Blessed. I think there are so many people that deserve this award more than me. I’m humbled to take it especially because I am an immigrant.

At what age did you realize you wanted to study medicine? And what pulled you towards studying cardiology specifically?
I have always loved the smell of hospitals. I was very poor, and my father died when I was nine – he had a heart attack at 49. He took me to school that morning and was dead by 3pm. After he died, my mother and I moved into the projects in Miami. When he died, we didn’t have education [about heart disease] – the American Heart Association had been founded, but that education didn’t get to immigrants like us. My mother died when I was 19 of cirrhosis of the liver.

I started college after my mother died – the rest of my family was still in Cuba. I had three jobs – modeling, tutoring, drawing blood. I’m a product of community college, because that’s all I could afford. I then went to the University of Miami, by then I was living with my aunt who had come from Cuba – but I paid for my own education.

I also have a masters in public health, because I got tired of patients not getting the right medications at the right time. Heart failure is an epidemic. We need to think differently about it – look at the population, and look at what we can institute to make a difference to patients.

What accomplishment throughout your career are you most proud of?
My daughter – the light of my life. She’s a veterinary student at Ohio State University and graduated with a BA from Duke in May.

A study recently came out saying younger Hispanic women face higher risk of death from heart attacks. Why do you think this is the case?
Hispanic women are more behind in knowledge. Hispanic women are now where Caucasian women were 10 years ago. It’s not very good. That’s why we’ve had all these campaigns in Spanish. We have the same risk factors.

What can we do to prevent this?
I’m trying to get Hispanic women to pay attention – know your cholesterol, exercise, lose weight, really take care of yourself and teach your aunts, daughters and grandmas. I have seen a lot of young Hispanic women who sat with chest pains for more than three days – it’s more the norm than the exception. There’s also a fear to go to the doctor, but more than anything else it’s a lack of acknowledgement that there’s something wrong. Symptoms are not always crystal clear. If you have symptoms, go see somebody. Don’t make up excuses. We always take care of everyone else but ourselves.

What do your daily duties entail, and what do you love most about your job?
I spend 30 percent of my time with the FDA as a consultant for devices and an internal medicine reviewer…I see patients in the clinic, in blocks of time. I’m responsible for reducing the 30-day readmission rate for heart failure. It’s unacceptably high. Patients come back for many reasons. Nobody has a perfect answer, but we’re working on it. I do clinical trials with my chief, Dr. Mario Garcia. We coordinate the clinical trials, and I mentor the fellows on their academic projects.

RELATED: FDA has banned trans fats, but does it get to the heart of the problem?