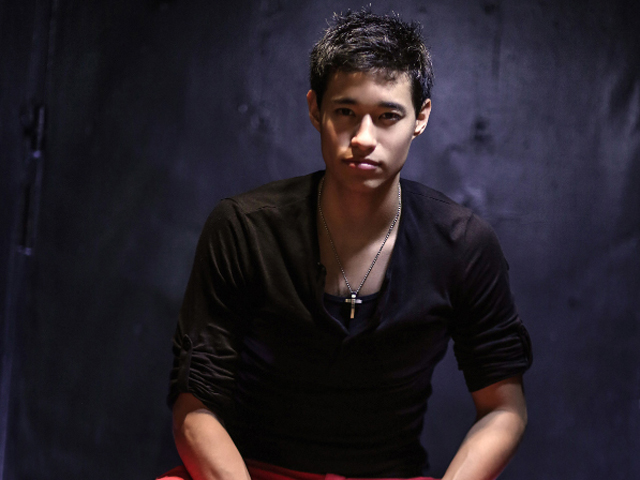 At 28, composer and multi-instrumentalist Tony Succar has accomplished a pretty remarkable feat. For the past four years, he has worked tirelessly to bring to life the masterpiece that lived in his musical mind – to unite 100 talented musicians, including Jon Secada and salsa stars such as Tito Nieves, Obie Bermudez and La India, to make the first-ever Latino tribute to the late King of Pop, Michael Jackson. In other words, think “I Want You Back” with a salsa twist.

As part of the project, Succar and his production company produced an hour-long documentary about the legendary experience which is going to be released on DVD in Mexico this month and with plans for the U.S. in the future.

Born in Peru to a Japanese mother and a father with Lebanese, Mexican, and Spanish roots, Succar immigrated to Miami, where he presently lives, when he was two. He was surrounded by music all of his life, as his parents Antonio and Mimy Succar were musicians in Peru. While in the U.S., the family started their own family band called Mixtura – the same name Succar named his current production company after.

Soon after graduating with a master’s degree in jazz performance at Florida International University in 2010, Succar says he got a call from a booking agent asking him to produce an outdoor Halloween tribute to Michael Jackson called “Thriller on Collins.”

“But I said, ‘I’m a salsa band – how am I going to do that?’,” Succar recalls replying to him. “So it was like God saying this is going to happen. I did a salsa version. The people loved it,” he says. “When I saw the reaction, I thought if they liked it with ‘Thriller,’ they would like it with other songs. It was a dream for me starting from nothing.”

After the success of show, Succar wasted no time in starting a Kickstarter campaign which raised $10,700.

“The main thing that connected with me is his (Michael Jackson’s) musicality. He kept pop music at a high level. Being a musician, you love that and all of us [musicians] understand that,” says Succar. “And secondly, I really admired that he wrote music with a very positive social message that spoke about love and change. Something we need to respect Michael Jackson for, and why I named the album “UNITY.”

“Michael Jackson was an influence for a lot of singer-songwriters,” says singer Jon Secada in the “UNITY” documentary. “I think what attracted me to this project starts with the music – how much I love the music. I think Michael Jackson would love it, because he was an innovator. He enjoyed taking chances.”

Tito Nieves added, “All we can do is make sure his music never dies.”

How did Succar get so many well-known musicians to participate in his project?

“It wasn’t that I chose them, it was a domino effect,” says Succar. “I tried to get Tito Nieves for three months until I said ‘Olvídate!’ (‘Forget it!’) I ran into Kevin Ceballo. We started recording the songs. I was planning just to do it with him. Then a guy peeked in the studio one day and said, ‘Hey, it sounds pretty good.’ He was really good friends with Tito Nieves!”

Apparently, Succar says he had e-mailed Nieves so many times, they told him he had been labeled as spam. However, thanks to that random listener who knew Nieves and called him on the spot, Nieves agreed to participate in the project immediately.

“The music spoke for itself – that’s how everyone was chosen,” says Succar. “No money in the world could have made this happen.”

Succar says he listened to every Michael Jackson song multiple times in order to choose the tracks for the “UNITY” album. At first, he was going to choose the ones that gave him goosebumps.

“But all of them gave me goosebumps,” says Succar laughing.

“All African music has la clave – bam bam…bam bam,” he continues, while tapping his hand on his knee as if it were a cajón – the first instrument he ever learned at age three. “When you analyze Michael Jackson’s music, I would call it African American music. When I listened to the music, I’d play la clave to it, if it sounded good, those were the ones I’d keep.”

Then, he says he thought about how to create a story with the songs he picked.

“‘I Want You Back’ was a song he sang as a little boy on ‘The Ed Sullivan Show’…the most important I wanted to include were songs that spoke about Michael Jackson’s mission – about unity and change,” says Succar, who also ended up including “Earth Song” sung by La India and “They Don’t Care About Us” sung by Kevin Ceballo, among others. “At the end, it’s to be a grain of sand to continue what he wanted to see in this world – ‘No’ to discrimination and ‘yes’ to equality.”

Succar says he had become the ultimate fan of Jackson after he died, and even more so after this project.

“I’m so thankful for the opportunity for me to put a drop of sand in his legacy and inspire others to learn about his music,” he says. “Many times Latinos know the songs, but not the lyrics so sometimes we change the lyrics to Spanish.”

In total, 100 musicians participated in the “UNITY” album, but Succar says there are 16 of them that travel to play.

“I want to be able to tour the live Michael Jackson experience,” says Succar. “I strongly believe that ‘UNITY,’ that title, is not only a representation of what this album means, but a representation of a movement that I’d like to create where we can unite cultures and do special projects. I want to try to do the same with other artists and bands like The Beatles, and the Bee Gees – songs that translate to the Latin format. Un granito de arena. UNITY is not going to end here. You’ll see more in the near future.” 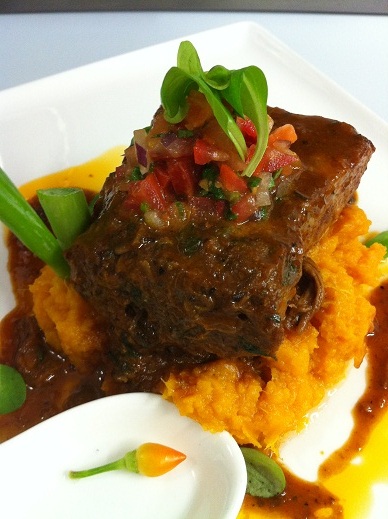 A good roasted pork can find its way onto just about every Latin American Christmas dinner table. There’s the Cuban lechón, a whole pig marinated in citrus and garlic and cooked low-and-slow in a caja china. The Puerto Rican pernil, a juicy shoulder cut rubbed with garlic and herbs and oven roasted. And then there’s Peruvian pork, flavored with aji panca, a unique chile virtually unknown outside of the Andean region. Smokey, sweet and fruity all at once, the heat from this chile is precisely what makes Peruvian pork—well—Peruvian. We asked 43-year-old Lima-born Chef Miguel Aguilar, winner of the Food Network’s “Chopped” competition last summer and owner of Brooklyn’s Surfish restaurant, to share his recipe. Aside from the aji panca, Aguilar also uses soy sauce. “Peruvian food has a lot of fusion,” he says. “It has no barriers.”

Aguilar serves his Peruvian pork, pictured above, on a bed of mashed sweet potatoes and tops it with fresh salsa.

2. Place the pork skin side up in a large roasting pan, and pour the chicken stock over it.

3. In a blender, puree the garlic, onion, aji panca paste and soy sauce for about a minute, or until pasty. Add a little of the chicken stock to the puree to make it pourable, and pour over the pork.

4. Add the cinnamon sticks to the liquid and season with salt and pepper to taste. Cover the roasting pan with aluminum foil and cook in the oven for 3 1/2 hours. No basting is needed. Remove from oven when internal temperature reaches 165, and allow to rest for 15 minutes before cutting.

5. To serve, place individual slices of pork on a bed of sweet potato puree, drizzle with the pork juices from the roasting pan, and garnish with freshly made salsa.