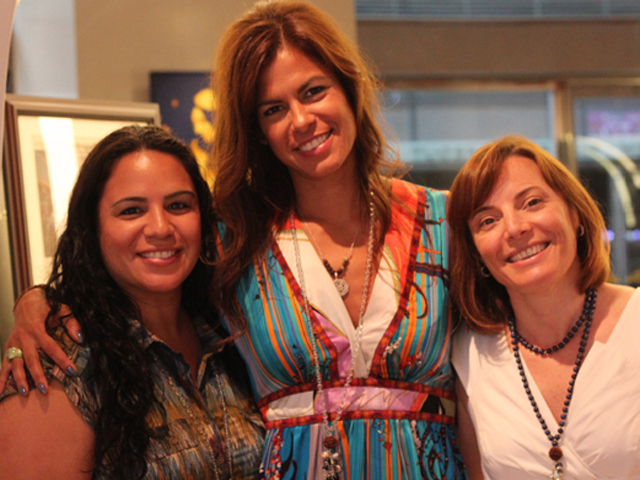 For Veronica Ruelas, it was just a matter of seeing life through a different pair of glasses. She says she didn’t always love her job as an optometrist. It took her having an “Eat, Pray, Love”moment and deciding to study yoga in India, four years ago, which changed her perspective on her life and career.

Today, she is not only an optometrist at ArtSee Eyewear in New York City’s Financial District, she also founded Third Eye Vision – a sustainable clinic where international doctors can come to treat and provide training to the local hospital doctors and staff in an underdeveloped section of India. In order to run this clinic at no cost to patients, she started her own line of ashram clothing and accessories called AshramChic.

“I wasn’t happy with what I was doing for a living so I started googling ashrams,” says the 40-year-old New Yorker. “Before I knew it, I was on my way to an ashram in the Bahamas with a tent — the chicest tent I could find.”

The tall, half Dominican and half Puerto Rican-Mexican doctor, who grew up in a rural part of New York, seems to do everything with a natural sense of style and elegance.

“I wanted to make sure if I was having epiphanies, it’d be in a nice place,” says the fashionably colorful Ruelas.

She says four years ago, her yoga missions became her focus. She lived like a gypsy for about two and a half years, putting her belongings in storage and traveling from ashram to ashram. During this time, she learned the karmic yoga principle of giving back.

“As soon as I started volunteering is when I started falling in love with my career,” says Ruelas. “I had a renewed passion when I wasn’t getting paid for it.”

She says now, when she hears people complaining they don’t like their job, she tells them to start volunteering.

“Life is very fair that way,” she says. “It shows what you put out, you get back. It’s a very balanced equation.”

She says she originally chose the field of optometry as arbitrarily as she was choosing what dress to wear. The only thing she says she was sure of was she wanted to be a professional.

“To know what you want to do, you really have to know yourself,” says Ruelas who just now feels she is fulfilling her destiny.

During the last year and a half, she says she feels like she has finally made a home for herself in New York City.

“I wake up at about 5:30am, and I make hot water with lemon,” says Ruelas about her daily yoga morning ritual. “Then I meditate – sometimes only five minutes…I write in a diary the things I’m grateful for and then set my mantra for the day.”

Mantras such as, “I am fun,” and “I am patient,” is a central point to Ruelas’ life and business. Not only does she pick one for herself every day, she also includes them on the brightly-colored beaded bracelets she makes for Ashram Chic.

Most of the time she says she reminds herself to “Go slow.”

She says this is very important in keeping herself balanced while running her three companies.

“I talk to banking guys about meditation,” says Ruelas about the difference just taking 10 minutes to breathe slowly at your desk can make. “Now I realize when you pause, you get more done. You’re more focused.”

She says we also have so much to learn from our abuelitas.

“Abuelitas are the biggest karmic yogis,” says Ruelas. “They put their dreams aside for us…yoga in its highest form is giving back.”

She says when you start helping others, you don’t think about your problems anymore, and answers come.

“Don’t give up, follow your heart, and volunteer,” recommends Ruelas. “Go back to what you wanted to be when you were little. Do what you enjoy doing and help others do it…Show up, let go, and watch the outcome.”

Uttarkashi 2011 from ThirdEyeVision on Vimeo.